A rights based approach to nature conservation

TEMA: NATURENS RÄTTIGHETERThe ecologist Guillaume Chapron, SLU, and the lawyer Yaffa Epstein, Uppsala University, are here giving a summary overview of how the idea of nature's rights has started and developed, and discusses its potential for nature conservation in the world. Guillaume and Yaffa are currently at the beginning of a research project on nature's rights and the UN sustainability goals.

Most countries have enacted environmental laws that create obligations to protect species and natural areas. Such laws apply at the national level, such as the Swedish Environmental Code, or at the international level, such as the European Habitats Directive and the Convention on Biological Diversity. Still, the increasingly degraded state of the planet suggests that existing environmental laws are failing. Sweden for example will not meet the 2020 Aichi targets agreed upon in 2010 under the Convention on Biological Diversity. One reason that has been proposed to explain this systemic failure is that today’s environmental laws are anthropocentric. Nature is frequently protected for the benefit of people and not for its own sake. In addition, many environmental laws include provisions for derogations so that social and economic considerations are taken into account. While these provisions may be viewed as a proportionate balancing of interests, their practical implementation can lead to nature conservation coming second when it confronts economic growth, which remains an unquestioned paradigm.

Triggered by the aggravation of the planetary crisis, a new momentum is emerging for a radically different approach to build a sustainable future for humans and nature. That movement revisits the premises of our legal system by postulating that nature—or certain aspects of nature—is a moral and legal person and deserves its own rights.

The idea of granting legal personhood to nature is itself not new, and was planted 45 years ago by a professor of law in California, Christopher Stone, who wrote a legal article provocatively entitled “Should trees have standing?”. His article reached fame with the US Supreme Court case Sierra Club v. Morton in 1972, where a lawsuit brought by the Sierra Club, an environmental NGO, sought to block the development of a ski resort in the Mineral King valley of the Sierra Nevada Mountains. The NGO lost because the court ruled it could not allege any injury: only the forest was injured, but not the plaintiff, which therefore could not prevail. However, Justice William O Douglas, having prefaced the volume where Stone’s article was published, issued a dissenting opinion arguing that “Contemporary public concern for protecting nature’s ecological equilibrium should lead to the conferral of standing upon environmental objects to sue for their own preservation. This suit would therefore be more properly labeled as Mineral King v. Morton”. Although Douglas’ dissenting opinion called attention to the advantages of legal personhood nature, the impact of this idea seemed limited and Stone’s proposal never reached the mainstream.

This idea has made a resurgence in the 21st century. In the 2000s, several South American countries elected leaders with a strong agenda for social justice agenda that stemmed from indigenous critical perspectives. An increased political involvement and representation of indigenous communities meant that a less anthropocentric and more ecocentric worldview than the Western worldview could now be translated into political decisions. The consequence was that in 2008 Ecuador adopted a constitution granting rights to nature and in 2010 Bolivia enacted a law recognizing the rights of Mother Earth. In parallel, indigenous communities in New Zealand succeeded to have two rivers being granted rights in an agreement with the government of New Zealand. During the past decade, we have witnessed an increase of natural entities being granted rights. For example, communities in the US have passed local regulations recognizing legal rights of nature beginning in 2006. In 2017, Indian courts granted status of living entities to the Himalayan Gangotri and Yamunotri glaciers and human status to the Ganga and Yamuna Rivers, though these decisions have been stayed by the Supreme Court. In 2018, the Supreme Court of Colombia issued a ruling making the Colombian Amazon Region a subject of rights, which include the rights to “legal protection, preservation, maintenance and restoration”.

An aproach with consequences

As its core, a rights approach sets strong moral demands. When nature protection is described as a right, attempts to change or weaken protection may be seen as illegitimate. By the same token, a law that weakens the human right to non-discrimination would be attacked as illegitimate, even if such a law was adopted through a democratic process. Using rights discourse may therefore act as a moral bulwark against the legal downgrading which has been problematic for nature protection laws. Similarly, framing policies as a rights issue limits policy choices by precluding instruments that subordinate nature protection. Conservation triage, with its acceptance of species extinctions when economically rational would become unacceptable. No government would today engage into “equality triage” whereby it would be acceptable to let some discriminations persist due to economic prioritization.

Framing nature conservation as a rights issue instead of one of biodiversity targets or ecosystem services also carries important practical implications. Being considered a person implies no longer being an object managed for the interests of other persons. For example, corporations, as rights bearers, can defend their own rights against other persons, human or otherwise. Their property rights are protected by law; their wealth is not something for other persons to freely use until the corporation becomes vulnerable and enters a list of protected corporations. Species and ecosystems on the contrary generally need first to be listed as vulnerable to enjoy some form of protection measures that are compatible with human activities. Nature being a rights bearer or legal person implies its own interests must be explicitly taken into account and are no longer what other human parties exclusively and arbitrarily decide they can afford. According to this idea, some forestry practices in Sweden may be considered a violation of the rights of the white-backed woodpecker (Dendrocopos leucotos) to its habitat, even if legal under existing environmental laws. Another potential advantage from a conservation perspective is that assertions of rights are not dependent on the existence of an advocacy organization. Like people suffering from discrimination, natural entities may be able to assert their rights even if they have no advocacy group. In a conservation context, rights of nature means that nature protection becomes less steered by strategic prioritizations of nature conservation organizations and associated political pressures or funding sources.

While a rights based approached to nature conservation has the potential to be a game changer, it remains unclear whether it will be successful. Although Ecuador and Bolivia were the first countries to recognize rights of nature, this recognition has not halted environmental destruction in these countries. The limited number of positive outcomes should however not be used as a justification to discard the potential of rights of nature for biodiversity conservation. After all, in the first years following the 1789 Declaration of the Rights of Man and of the Citizen, revolutionary France saw a regime of terror with mass executions, one of the leading conservative philosophers Edmund Burke in Reflections on the Revolution in France to argue that human rights were an absurd idea. A more serious concern may lie in the risk that rights of nature become politically exploited for purposes that more relate to interests from specific human interest groups than to nature protection itself. Concerns have been raised, for instance, that the Indian court ruling granting legal personhood to rivers may have been motivated by Hindu nationalism. The Ecuadorian government suing artisanal miners for violating rights of nature by polluting rivers also appears remarkable for a country where 12% of the territory is allocated to mining concessions. The alleged violations of nature rights tried at the popular International Tribunal for Rights of Nature concerned more violation of indigenous rights than nature rights per se. In Sweden, the Sami Parliament, though supporting the Universal Declaration of the Rights of Mother Earth, also takes position that the wolf has no place in the reindeer herding area, arguably a violation of Swedish wolf populations’ rights to existence and reproduction. To be an effective answer to conservation challenges, rights of nature will need to be grounded in ecological science and protected whether or not these rights benefit human interests.

Evidence suggests that existing environmental laws may not be able to fully preserve nature from systematic destruction. Our own research has shown that laws are often victims of well elaborated tactics to end up being completely ineffective. By treating the issue of nature destruction as matters for policy debate rather than as an infringement of rights, existing environmental laws may be hindered from achieving their goal. By framing the protection of the natural world instead as a rights issue, nature conservation may become more effective. Our ongoing Formas project “Naturens rättigheter för att rädda livet på land och i vatten” explores whether and how recognizing rights of nature may contribute to nature conservation and attaining the UN 2030 sustainable development goals. Specifically, we will map some of the questions important to rights of nature in various legal systems from both legal and ecological perspectives. These questions include what natural entities can have rights, what those rights can be, how these rights can be enforced, and how nature rights will be weighed against human and corporate rights. 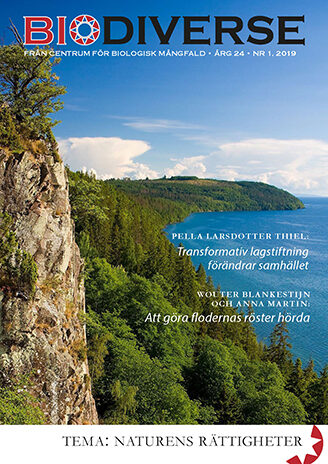