TEMA: LJUSFÖRORENINGARThe ability to see different colours varies between species. In those cases when artificial lights can´t be avoided, adaptation of the light spectrum can be a way to minimize the negative effects of light pollution. Long term studies are conducted in the Netherlands, on how different groups of species are affected by different light colour.

In order to prevent negative effects of light pollution, it is foremost important to reduce the amount of light we produce during the night. However, as this is not always feasible, adapting the colour composition of the light – which means adapting the light spectrum – can be an option to reduce local impact on specific species groups. Historically, the light spectrum was fixed with lamp type, as each technique for producing light had its intrinsic spectrum. Now, with the availability of LED lighting, custom colour composition of light sources has become available and affordable. Information on the reduction of impact of light on species by spectral adaptation is still relatively limited, but has had a boost by recent experiments in for example the UK and a large, long-term study (‘Light on Nature’, ongoing) in The Netherlands. In the latter study, three light colours (white, green, red) are compared in replicated, real-life illumination setups experimentally installed in forest edge habitat. Here, I will provide a brief oversight of main effects of light colour on different species groups, based on this and other experiments. I will end with some recommendation when and how to apply different spectra in order to reduce impact.

It is important to realize that the capacity to see different colours strongly varies between species.  Birds and many reptiles and amphibians for example have superior colour vision compared to many other taxa. Nocturnal mammals – for example bats and mice – are predominantly sensitive to green and blue light, as they lack a long-wave cone and hence are generally expected to be less capable of seeing the red part of the spectrum. However, it is important to realize that a behavioural response to light of a certain colour may not necessarily depend on how intense such light is perceived.

It is also important to be aware of the fact that we ourselves have our own distribution in sensitivity to light colour. Although we can – unlike many other mammal species – see red light relatively well, our eyes are much more sensitive to green light. In order to produce equally intense red and green light for ourselves (i.e. light with an equal Lux value), the amount of energy in the red part of the spectrum needs to be substantially increased. As light types that are compared in experiments are eventually intended for civil use, normalizing to Lux value is a logical choice and in fact this is often implemented, as was done in the experimental comparison between white, green and red light in The Netherlands.

Flying insects are attracted to light at night. The spectral dependence of this attraction is relatively well documented, with strong, direct attraction of insects to UV, blue and green light. Also, red light seems to interfere less with different life-history stages of moths. Although the direct attraction of moths by light is short-wave biased, recent work has shown long-term negative effects on moth populations in the direct surroundings are also present for red light. In a three-year comparison between the impact of white and amber (~592 nm) light, effects on the presence of invertebrates showed to be dependent on the class or order. This calls for caution with the use of blue-reduced lights intended for mitigating impact of light on insects.

Even though most birds are diurnal species, there are many well-documented effects of light at night on birds. Much less is known on the impact of different light spectra. One of the most prominent effects is the attraction and disorientation of migrating birds by red light. This attraction happens when brightly illuminated objects are present amidst a dark environment, such as oil rigs or light houses. The attraction is furthermore augmented by overcast. Reducing the red part of the spectrum (and hence applying blue or green light) clearly prevents the loss of directionality of migratory birds in the laboratory, and also seems to reduce the attraction of migratory birds to light in the field. Other effects of light spectrum on birds vary. A diurnal passerine (great tit, Parus major) roosting at night in their breeding territory shows less disturbance by green and red light, and are disturbed more when exposed to white light. However, recent work indicates that spectrum dependent effects of light on sleeping birds may be species dependent. A clear example of a differential impact of light spectrum on breeding birds is the observation that birds breeding close to white and green illumination start breeding significantly earlier in the season compared to birds breeding in darkness. However, effects of different spectra on birds at the population level remain largely unclear.

The response of bats to light varies with the species’ ecology. Evidence that all bat species avoid illuminated areas is accumulating, and it is widely believed that light aversion of bats is driven by fear of predation. However, fast-flying, agile bat species often make use of insects accumulated by light (see also the specific section about bats by Jens Rydell och Johan Eklöf) and are hence these species are often observed foraging around light sources. The hypothesis is that these species (such as belonging to the Pipistrellus and Eptesicus genus) do not fear predators as much as slow-flying species, such as Myotis and Plecotus species. This – foraging ecology dependent – response of bats also explains the response of bats to different spectra. Like other nocturnal species, bats are assumed to be less capable of seeing the red part of the spectrum. For the few species tested, this indeed holds up. Hence, bats may perceive red light as less intense compared to white and green light.

In the large-scale and replicated field study in The Netherlands, bat activity was assessed for five consecutive years using automatic bat detectors. The data clearly showed that bats were indeed equally active in red light compared to dark control. Interestingly this held up for both agile, fast-flying non-light-shy bats (equally less active in red light), and slow-flying bats (equally much active in red light). The explanation is that – see also the response of insects above – red light accumulates less insects and thereby is not attractive for agile, fast-flying non-light-shy species.

It is important to note that the response of bats to light spectrum is context dependent. In a different experiment where bats had to make a choice between flying through two identical – and narrow – culverts, bats did not avoid light and were indifferent with respect to different light spectra. Further testing for the impact of spectrum on the response of commuting bats is therefore essential.

Spectrum dependent effects of light on other mammals

Little is yet known on the response of non-flying mammal species to different light spectra in the field. Much of what we know comes from information on the relatively well documented spectral characteristics of (laboratory) mouse vision. In the Light on Nature setup in The Netherlands, mammal activity is long-term assessed with the use of camera traps. Preliminary results (published in due course) indicate a strong reduction of activity of wood mice by all light colours (white, green and red light). Voles show a reduction in activity by light as well, but not in response to red light. Like wood mice, mustelid species are less active in all light colours; the response of ungulates is highly variable.

We know relatively little on the impact of light spectrum on amphibians. In an experimental study done along road sides in the Netherlands, toads (Bufo bufo) migrating from their wintering grounds to reproduction areas during spring time strongly responded to green and white light, and less so to red light. White light caused toads to stall their movement, which potentially turns light into a means to prevent these animals from crossing roads at busy times. The precise mechanism, and the application of such a measure on a wider scale needs further investigation, however.

What spectra can best be used to avoid ecological damage?

It is important to avoid short wavelengths (blue light) in terrestrial habitat: most nocturnal species experience these as the strongest infringement of their natural habitat. UV light should be avoided at all times, and not only for nature – producing UV light is a waste of energy as it is useless for our sight. Long wavelengths (red light) attract less insects, and cause less changes in bat and vole activity. Blue light can be reduced by using warm white light (lower than 2700 Kelvin), however, replicated studies as done in the Netherlands and the UK show that a reduction of impact of light on bats occurs when using light dominated by wavelengths longer than 600 nm – even in case such red light is equally intense as full-spectrum white light.

In the rather special situation of migratory birds above sea, red light should be avoided – hence illumination with green light is a feasible option (for birds, blue would also be possible, however, blue is not suitable for humans). This holds up for oil rigs and ships; green light may also be beneficial directly at the coastline or on islands, although this needs further investigation.

It remains important to keep in mind that the effects of light can be latent and subtle, and therefore only emerge after many years of presence. The finding that the number of moths declines after several years of presence of light, of all colours white, green and red, illustrates that a certain light type that shows beneficial in direct sense, may have an equally negative impact on species over time. It therefore remains important to keep light levels low or to avoid light at all. 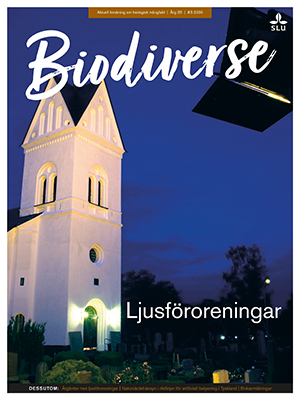