The State of the World’s Species

TEMA: UTROTNINGENOf all the world's species only some have been assessed as to whether they are threatened or not. The red list does not describe the worst possible scenario, only what we can assuredly say at present, and there are many unreported cases. There may thus be many more threatened species than the list takes up.

In its work on the red list of the world’s threatened species, the International Union for Conservation of Nature (IUCN) has conducted a risk analysis of a total of 87,040 species. Of these, 25,062 were classified as threatened and were put on the red list. All known species have thus not undergone this assessment.

Of the vertebrates, all mammals and birds have been assessed and about 85% of the amphibians, but only about half of the reptile and fish species. The amphibians are the most threatened vertebrates, with almost half of the species at risk. The birds have fared slightly better, with 23 % threatened or near-threatened species (including species for which knowledge is lacking but that are probably threatened). Some species are probably more threatened than the red list indicates. One study argues that the IUCN’s criteria underestimate the risk as regards bird species with small habitat ranges. More detailed geospatial data on biotope distribution shows that the actual distribution of the species is much smaller than that anticipated in the threat classification. Of the 586 endemic or threatened species studied, 210 species were assessed to be more threatened than are stated on the IUCN’s red list, 189 of which are today not considered to be threatened at all.

The WWF’s Global Living Planet Index is a compilation of population statistics covering 14,152 populations of 3,706 vertebrate species from all over the world. The index shows a loss of 58 % of the populations’ individuals between 1970 and 2012. Among terrestrial vertebrates with a known population trend one third show a reduction since 1900, and 30 % of these are not yet regarded as threatened. This suggests that the proportion of red-listed species will increase further.

Of the invertebrates relatively few species have been assessed, only 19,000 out of a total of over a million described species. It has often been claimed that invertebrates are less sensitive to external threats than vertebrates, partly because there are so many more individuals. The IUCN has made a special effort to assess more invertebrates, including freshwater crustaceans, reef-forming coral and dragonflies. 30 % of freshwater animal species are threatened (including species which are likely threatened, but for which knowledge is lacking) while dragonflies have fared better, with 13 % threatened in a random sample of 1,500 species assessed. Among dung beetles, 11 % of the 1,500 species assessed are threatened. The corresponding figure for all vertebrates is 21 %. According to a global index of populations of invertebrates, butterfly populations have on average declined by 35 % over 40 years. Species extinction and reduced abundance and distribution are at least as serious among invertebrates as among vertebrates. This is probably because they are threatened by biotope destruction and climate change, which affect small and numerous animals just as much as large species with small populations.

Most of the species assessed as threatened are plants. All of 12,102 species are listed as endangered. Nonetheless, knowledge of plants’ conservation status is incomplete and unevenly distributed between different groups. In four groups of plants, almost all the species have been assessed: cacti, magnolias, conifers and cycads. All four contain high proportions of threatened or near-threatened species: 36 %, 68 %, 50 % and 85 %. If these four groups are representative of all vascular plants, the situation would be disastrous for the world’s plants. Probably, however, it looks slightly brighter for vascular plants as a whole, since these four groups were analysed precisely because it was suspected that they contained numerous threatened species. Of plants other than vascular plants, only a few species have undergone risk assessment, so very little is known of the threat status of mosses, liverworts, club moss, green algae and red algae. The situation is the same as regards all brown algae, fungi, lichens, and micro-organisms.

The most threatened vertebrates: the amphibians

In the early 1990:s, an inventory was made of amphibians in the Monteverde Cloud Forest Reserve in Costa Rica. It showed that 20 of the originally 50 species had disappeared. Among them were the Golden toad (Incilius periglenes) and the Clown frog (Atelopus varius). The cause was hard to find because the biotope was strictly protected and no tangible threat could be observed. At about the same time, it was noted that the newly discovered Platypus frogs (Rheobatrachus silus, R. vitellinus) from Queensland in Australia had died out. During the 1980:s, dramatic reductions in amphibians were observed in the Sierra Nevada in California. One species of frog (Rana sierrae) was previously common, but over just a few years had disappeared from 90 % of its range, although the biotope was protected. Similar seemingly inexplicable losses of amphibians took place across the globe.

In 1999, a new species of fungus was discovered, Batrachochytrium dendrobatidis, which infects the skin of amphibians. The infection is fatal, probably affects the skin’s ability to take up oxygen and osmotic properties. Not much is known about the disease, chytridiomycosis, but interaction with climate change seems to be an important factor, which particularly affects aquatic species’ reproduction, in humid forests at high altitudes. How the fungus spreads is not clear. Trade in live amphibians may have spread the fungus all over the world. More than 200 species have suffered dramatic population decline or already died out due to chytridiomycosis. The fungus has also been found in Monteverde, the Sierra Nevada and Queensland. In Monteverde, the climate has changed so that the forest is not shrouded in mist all year round but dries up periodically, and the temperature has risen. It may have been a breeding ground for the fungus. The disease has since spread from Costa Rica through Panama. In northern South America and Central America, 100 species of the genus Atelopus have disappeared regionally, which has been explained as a result of general warming of mountain forests and fungus infestation.

Amphibians are sensitive to external threats because they have a life cycle of eggs, larvae and adults, which often live in different habitats. They have a thin, moist skin that makes them very susceptible to chemical compounds in the air, the water and the ground. They are poikilothermic and are dependent on living within a specific temperature range. Many species have a very small distribution area. The threatened amphibian species are affected more often than expected by synergies between the various threats, for example between disease and physiological stresses caused by UV radiation, pollution and climate change.

No other group of organisms has so many critically endangered species as the amphibians. A total of 2,100 species are facing extinction, 113 of which may already be extinct. 46% of the species are probably threatened (assuming that the proportion of threatened species is as great among species where knowledge is lacking as among other species) or near-threatened. 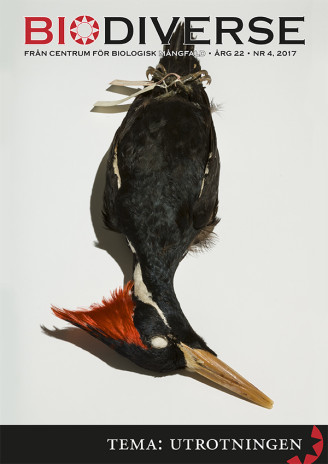