TEMA: OSYNLIGA VÄRDENWhat separates and what unites scientific knowledge and traditional ecological knowledge? Do we need different kinds of knowledge in our work for sustainable livelihoods? Marie Kvarnström has talked with Robin Kimmerer for help to sort things out. Robin Kimmerer is a professor of Environmental Biology at SUNY College of Environmental Science and Forestry in Syracuse, New York. She is also a member of the Citizen Band Potawatomi, one of the people who lived around the Great Lakes in North America when the Europeans arrived there. Robin Kimmerer is the Founding Director of the Center for Native Peoples and the Environment, whose mission is to create programs using both indigenous knowledge and scientific knowledge in the work for sustainable societies.

Robin Kimmerers students picking Sweetgrass, ("Hierochloe odorata"), a holy grass used by Potawa¬tomi and other cultures near the great lakes in North America. When picking Sweetgrass one always gives a gift in return to the site, often tobacco.

Traditional knowledge is very down to earth, but it also has spiritual and ethical dimensions. Knowledge is always linked to the responsibility of it may be used.
In Western science and philosophy, we have the Cartesian dualism where we put spirit in one room and  matter in the other and we don’t let them communicate in any way. Scientific knowledge is by its nature separated from values, ethics and spirituality. Therefore, it is not the only right tool to respond to the complex issues that lie at the interface between nature and culture. But to meet the challenges we face today, we need not only science but also human values and ethics. Researchers sometimes get defensive and say that if you recognize traditional knowledge it means that you do not respect scientific knowledge, but it need not be. Science is a powerful and valuable tool,  with its own strengths and weaknesses, which can be complemented by the particular strengths of traditional knowledge.I think these knowledge systems can coexist very well, and I think traditional knowledge can help us to use not only our intellect but also all of our senses, our emotions and our  spirit  to resolve today’s global problems.

Have we become too dependent on science today?
It’s vitally important that our environmental decision-making be based on scientific evidence, but to also recognize that there are other knowledge sources which may offer excellent guidance on environmental problem solving.  In using scientific tools, it is important to distinguish between the perspective of science and the scientific worldview. They are rather different. Science as an approach for inquiry and knowledge generation to understand the natural world is common to all peoples and is part of traditional knowledge. But Science need not be strictly coupled to the materialist, reductionist worldview of science, which omits values and seperates the observer from the observed.  A powerful combination for me is scientifically based research coupled with an indigenous worldview that places the focus on relationships, ethics and values. My criticism applies particularly to the scientific worldview, which has led to an intellectual monoculture, where people see science as the only way to understand the world. I’m trying to promote a polyculture of knowledge systems where different ways of understanding  can be used together.

In your article ”Restoration and Reciprocity” you talk about the importance of recreating a reciprocal relationship between us humans and our landscapes and the other species we live with. Can you explain what you mean, and why it is so important?
The notion of reciprocity includes the understanding that humans are not simply consumers, but that we have gifts to contribute to the well-being of ecosystems and that our participation in ecological processes can be a source of mutual flourishing.  Our participation may take the form of ecological and biocultural restoration,  doing creative scientific stewardship, land management-  and it can also include the gifts of the artist-of changing hearts as well as  minds, to renew a relationship of mutual respect and responsibility with the living world.

We have come so very far away from the creatures who actually keep us alive. I think when we forget that we are part of a vibrant living community we suffer a kind of loneliness as people, which I think is the basis for much of today’s unbridled consumption and exploitation. We have become strangers among the living beings of the land and no longer feel that we belong with them. I think that feeling of belonging is essential, not only for the world’s ecosystems, but for our well-being as humans. Belonging , which is a sense of mutual responsibility for one another is at the core of sustainability.

And ultimately, we are of course entirely dependent on the land and all its creatures. But today, it’s easy to forget it, when most of us buy all we need in convenient packages from shops which get their goods from factories , where they are manufactured and packaged. Many people are probably not even aware that everything ultimately comes from the earth and its ecosystems.
In my new book Braiding Sweetgrass I write about just that – that it’s not the grocery store that sustains life. To recreate the fundamental relationship to the land and to all of life, we must become aware of them. We must turn our attention to these other beings in order to understand that they keep us alive. One of the most basic things we can do to create positive change is to work – in education, in the family, in our lives – to be mindful of the living world around us. The indigenous philosophy has one aspect that is not at all romantic but very fundamental, and it is gratitude – gratitude to the animals and plants that give their lives for us to live. First, attention and then gratitude, which opens the door to reciprocity – what can I do to give something back? Attention, gratitude and reciprocity can change our way of life. And it helps us back to the feeling of oneness with all beings and the earth.

You spoke earlier about traditional knowledge having a spiritual dimension. In Sweden, many researchers and people are generally uncomfortable with the concept of spirituality.
I think many confuse spirituality with religion. For me, spirituality is a kind of humility, an openness to explore. I don’t think of spirituality as “supernatural”, rather it is an entirely natural realm that we simply do not yet understand.  In this way, there is common ground between science and spirit-they work together. Spirituality is about what we do not understand, it is an acknowledgement that life is ultimately a mystery.

Do you have any advice for us Swedes working with scientific knowledge as a basis, how we can create space for understanding other systems of knowledge?
I think the best basis for mutual understanding between different kinds of knowledge are working together locally in geographic areas. If we jointly look at what we can do in an area that both conservationists and local communities or indigenous peoples care about, we have the best conditions to understand the value of each other’s knowledge. And I believe humility and openness to each other’s knowledge is a good start.

I think intellectual pluralism is very important to our cultural evolution. Both traditional and scientific knowledge are complementary means of understanding the natural world and our place in it- and both of these knowledge systems are rooted in the land. I think of them metaphorically as different “species” of knowledge, like different plant species in a garden. Our work is to create a fertile soil and climate in which these knowledges may both grow and coexist, for the benefit of all. 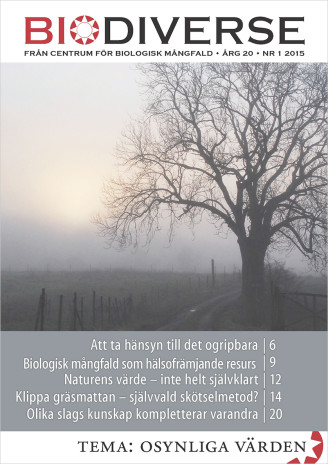