Microplastics in agricultural soils fields. Where does it come from, and what can it do?

TEMA: UNDER MARKYTANIt is a well known fact that microplastics end up in the ocean. But the microscopic plastic particles also end up in agricultural streams. One source for this is the sludge from sewage treatment works, but there may be other larger sources. We need more research about where these microplastics in agricultural landscapes come from, and the effect they have. The recycling of sludge to agricultural soils is a fairly common, form of soil amendment in Europe and North America, and an important part of a circular economy. Sludge can have high levels of phosphorus, and the organic matter in sludge can improve soil texture and water holding capacity. However, sewage sludge can also contain undesirable substances. There has been a lot of work done showing how sewage treatment works are effective at removing microplastics (MP:s) from wastewater and preventing them from entering the marine environment, but there has been relatively little consideration of where they end up.

Plastics in sewers comes from household and commercial sources. A lot of MP fibres are released during washing of clothes. MP beads may also be present in personal care products, although their use is being phased out. MP:s can also come from commercial users that either produce plastics of use plastic material in their business.

The aim of the JPI-Water funded IMPASSE research project is to quantify and understand the fate and transport of MP:s in agricultural soils and the rivers and streams flowing through agricultural areas. Our initial hypothesis was that application of sewage sludge to agricultural soils would be a good predictor of the MP content of soils, but there are most likely other bigger sources.

This is an area of emerging interest. To date, most of the research in the field focusses on MP:s in marine environments. There have been a number of studies of MP in freshwater, and there is an increasing number of studies of the ecotoxicological effects of MP on marine organisms. There are also more studies on MP effects on soil and freshwater organisms, but these are definitely in a minority.

There is also a need for research on the behaviour of MP in the terrestrial environment. We need to know what happens to MP in soil. Here are just a few of the questions which need to be addressed: Will MP continue to breakdown to smaller nanoplastics? What effects do MP have on soil ecosystem health? Will micro- on nanoplastics migrate to groundwater? Will erosion of soils result in MP:s being flushed into streams and rivers where they will eventually reach the ocean?

I got into this area of research as a result of ongoing collaborations with colleagues in Norway. We developed a model for predicting the fate and transport of organic micropollutants (e.g. PCBs, PFASs, DDT, etc.) in soils and surface waters. We then realised that the same modelling framework could be used to simulate MP fate and transport in soils, streams and rivers.

Unfortunately, we just don’t know the environmental consequences of MP:s. It is possible that there will be no consequences, or it is possible that the consequences will be severe. The few studies of MP effects on terrestrial soil organisms show a range of effects. In some cases, organism health is negatively affected by consuming MP:s, in other cases, there is no effect. The precautionary principle says that we really need to understand the effects better so that we as a society can make an informed choice about sludge spreading.

From a societal perspective, the presence of MP:s in sewage sludge may make it less acceptable to spread on agricultural fields. Given the importance of nutrient recycling, and the increasing importance placed on the circular economy, it is important that we have an informed and open discussion about how to use sludge, and how to ensure agricultural sustainability. 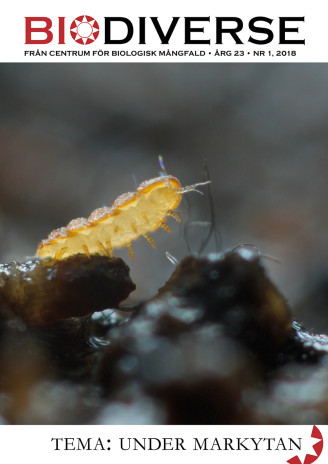