TEMA: MAT OCH BIOLOGISK MÅNGFALDFor many people in African countries, bush meat is one of few sources of protein in their diet. But hunting and killing wild animals for food, so called bush meat, is a threat to biodiversity – in many different ways. Not only are the animals hunted to the edge of extinction, but the tropical forests as ecosystem are also at risk, when some trees no longer have mammals to help them spread their seeds.

Nigeria has already lost more than 80% of its forests, and the remaining ones are in the country’s southeast along the Cameroonian border. Although logging and farmland encroachment into these forests remain important threats, they are not the only threats. Hunting of the forests’ wildlife for food is a severe challenge with complex consequences. The majority of the tree species in these tropical forests depend on primates who eat fruits and disperse their seeds over long distances, which is necessary for the trees’ continued recruitment and the long term stability of the forest ecosystem. Local people collect some of the same fruits and seeds, and this make an important contribution to people’s livelihoods. Many forest products are collected and sold as well as eaten by people, probably without much consequences for either primates or trees. However, people also hunt forest animals, from the large rodents on the forest floor to the endangered monkeys in the canopies, and even the critically endangered Nigeria-Cameroon chimpanzees (Pan troglodytes ellioti) and Cross River gorillas (Gorilla gorilla diehli) that inhabit these forests, either for food or for sale on the market to bush meat traders.

In a study carried out in four Nigerian villages in and around Cross River National Park, which straddles the Nigeria-Cameroon border, we found that all surveyed households collected fruits and nuts from the forest. At the same time, nearly 80% of the respondents stated that they eat meat from primates. Bushmeat in general is eaten as there are few other sources of meat in local communities. Livestock are not kept, so bushmeat is an important source of protein. Only around a quarter of the respondents ate any type of meat daily and 12% ate meat less than once a week. The african atilope duiker on a barbeque.

The primary reason for eating meat from primates was related to its taste while there was also a cultural belief that their meat makes you strong and healthy. Most of the respondents who ate meat from primates hunted it themselves. Interestingly, despite hunting and eating a large range of endangered species, nearly all respondents in the survey stated that they were in favour of better protection for primates, which suggests poor local knowledge about how seriously the remaining primate populations are actually affected and decimated by hunting.

The primates, especially the large ones, are slow reproducers with long adult lives, and therefore, their populations cannot sustain increased mortality. Hence, hunting makes their populations dwindle rapidly. Other animals, like large rodents such as porcupines (Atherurus africanus) or giant pouched rats (Cricetomys spp.), are naturally short lived but with very high reproductive rates. Therefore, these species are more resistant to hunting pressure and an increase in mortality.

Indiscriminate hunting of forest animals, particularly primates and other species that disperse tree seeds triggers a cascade of events with consequences for the ecosystems and the society. When primate populations decrease or disappear, tree seeds are not dispersed, but just fall down and remain under the parent tree, whereas if the fruits are eaten by primates the seeds will travel in the mouths or guts of the primates, until they are spit out or defecated long distances away. Far from conspecific seeds or seedlings the chances for germination are high, whereas if they fall in piles below the trees, they will attract fungi, insects and rodents, and their chances of germination are extremely low. Thus, in the absence of primates, once dominating fruiting trees can no longer reproduce. In the long term, this means that the forest changes and is becoming dominated by wind dispersed tree species and a mammal community dominated by rodents, instead of a much more diverse range of wildlife species. A social consequence for people is that such a forest will also provide fewer fruits and nuts to the people collecting these for their livelihoods. ”Mandrillus leucophaeus”, at a reintroduction Project. This primate is one of the most rare in the world.

Since there are few alternative sources of animal protein in the communities located in these forests, it makes sense to improve access to domesticated livestock and fish, for instance by encouraging poultry rearing and fish farming. In the long run, changing livelihoods and dietary patterns and decreasing the local reliance bushmeat by introducing other sources of animal foods may be as important a conservation method as enhancing wildlife and forest protection. At the same time, the support for protection of endangered primate species among local communities shows the need for improving local knowledge on wildlife as well as measures for their protection. 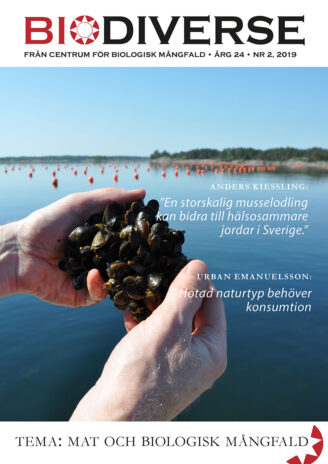