TEMA: NATURVÅRDENS VERKTYGMany sectors in society are involved in nature conservation issues, like agriculture, forestry and land-use planning. Coherence on a political level between these sectors is getting more and more important, not only to avoid conflict, but also to discover and develop synergies between the sectors. In our study, we see that nature conservation could be a tool for strengthening other sectors.

Traditionally it is conservation experts that work with environmental conservation, and most practical work regarding biodiversity is conducted within the “conservation sector” (Swedish: naturvård) with focus on protecting ecosystems and threatened species.

In the EU Horizon2020 project SIM4NEXUS (www.sim4nexus.eu) we have looked at interactions between the environmental/conservation sector and policies of different other sectors, including water, food, energy, climate, and land (incl. forestry and agriculture). We used a method called Policy Coherence Analysis, described by researchers at Stockholm Environmental Institute. It is a tool for analyzing conflicts and synergies between policy objectives and instruments used in policy implementation.

In a systematic way, we mapped the links between these sectors to highlight the potential synergies and conflicts between them. We analyzed the different interactions based on both literature review and input from representatives of different sectors gathered through surveys and an interactive workshop with stakeholders. And although our work has clearly shown that there are many obvious conflicts between environmental conservation and other sectors, the analysis have also revealed that biodiversity could both benefit from implementing other sectors’ policies/objectives as well as contribute to fostering other sectors’ progress.

Our analysis have shown that there are many conflicts between different policy areas. This is particularly the case between different production sectors and biodiversity conservation, simply because they require use of land and of different natural resources, which limits the space and possibilities for successful conservation. For example, a competitive market-oriented agriculture that Swedish agricultural policies promote undermines possibilities for the type of agriculture that would support high biodiversity, as it is believed that to be competitive there is a need for intensified agricultural production associated with reduced considerations for the environment. However, our study have shown that there are also possibilities for synergies. For example, if Sweden would aim at promoting its image of an “environmentally friendly” food producer and build its market competitiveness on that, it would lead to better alignment of the conservation objectives and the agricultural objectives (such as increasing ecological production). This would promote both competitiveness of agricultural production and conservation of biodiversity. Water, land, food, energy, and climate are interconnected, comprising a coherent system (the ‘Nexus’), dominated by complexity and feedback. Putting pressure on one part of the Nexus can create pressures on the others. Management of the Nexus is critical to securing the efficient use of our scarce resources. SIM4NEXUS aims to predict society-wide impacts of resource use and relevant policies on sectors such as agriculture, water, biodiversity and ecosystem services through a model-based analysis.

Another common conflict in Sweden exists between developing new housing areas and maintaining natural values such as biodiversity. In such conflicts, the development objectives often win over the environmental ones. However, our study has revealed that it is possible to develop new housing areas without fully compromising biodiversity. By promoting green infrastructure when creating new housing areas one may provide many environmental, social and economic benefits. A good example of that is maintenance or creation of natural or semi-natural systems that handle storm-water runoff in cities. Green components also contribute to increased well-being of the citizens, which may provide an even stronger argument for keeping such structures in the urban landscape.

We have also found that the climate policies, goals and visions may come into conflict with environmental goals. For example, objectives to reduce climate impacts through increasing the share of renewable energy may lead to an increased production of biomass, which in turn leads to intensively managed monocultures that compete for space with biodiversity-rich areas. However, if the focus is shifted from climate mitigation to adaptation, one can immediately see advantages of maintaining biodiversity for Sweden’s climate goals: it is biodiversity-rich systems that are sufficiently stable and resilient to minimize the potential damage caused by climate change. This potential synergy may encourage decision makers to focus more efforts on conservation and not only on biomass production.

Consequently, the key challenge of conservation professionals in a world where development and growth are typically still prioritized over sustainable management and governance of natural resources, will be to shake off the old image of hindering development. Instead, biodiversity conservation should be promoted as a tool for strengthening other sectors. 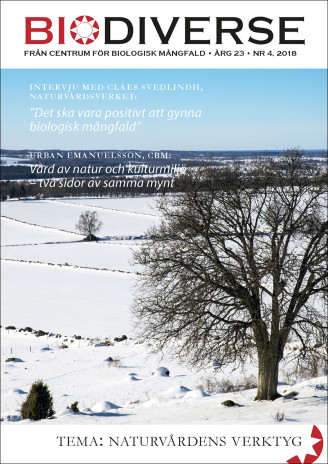